So what does it take to remove an age old proprietary 3.5 mm headphone jack and force millions of people to use the lightning port? Apple introduced the lightning port back in 2012 capable of carrying power, data and audio over a single port. Then why wait till 2016 to remove the headphone jack? Chief of marketing at Apple Phil Schiller says it took courage to do that. Was Apple not courageous enough all these years to do the right thing as they claim? Probably the answer is AirPods. Like it or not AirPods is the most advanced piece of headphone that is produced till date. As Jony Ive says AirPods is the first product in a wireless future Apple is working on for some time. The real challenge for Apple was not to replace one port with another but to develop a product that is wireless, easy to use, connects with Apple ecosystem and has Siri built in. So AirPods might be the first hint towards a completely wireless iPhone of the future.

The Lightning port on iPhone or Micro USB/ USB-C ports on Androids has three primary functions. Charging, Data Transfer and connecting peripherals like headphones and OTGs. The company first to offer these three functions wirelessly will produce world’s first true wireless device. Now let’s look one by one and see where Apple stands. Charging This is the single most important function on any mobile device for a port. Apple needs to find a solution if it has to make the iPhone completely wireless. Wireless charging has been on Samsung Galaxy flagships for years, but Apple never embraced Wireless charging. Part of the problem was a technical limitation. Apple uses metal unibody for its devices and you might be aware that until late 2015 there was no solution for wireless charging on a metal device. Qualcomm solved that problem in 2015 and announced wireless charging for mobiles with metal devices was now possible.

But just having wireless charging is not enough. When at home wireless charging is feasible, but what about while traveling? It seems Apple already has the solution. Apple was using Magsafe chargers on Macbook devices until 2016 Macbook Pro line was launched. Magsafe chargers don’t require a port per se. Connectors on the surface onto which a magnetic end can be docked is enough and Apple has done it before. Or if Apple gets courageous enough this time it might do away with any physical connection and instead ask people to carry a wireless charger all the time. So charging is not a limitation for going complete portless on iPhones.

Exactly like while charging, data sync mostly happens when the device is resting on a table top. You don’t need the data sync cable to hold your device thoroughly while it’s connected to a PC for sync. So this problem can be solved using Magsafe like connector, that will work both as a travel charging dock and data sync dock. Apple also has the best in class wireless data transfer mechanism - AirDrop. iOS devices can also sync with iTunes wirelessly. So data sync was never a limiting factor for a wireless iPhone. 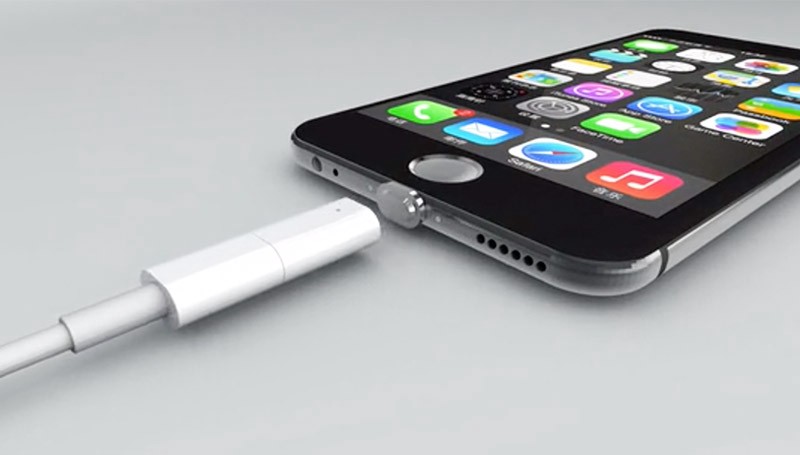 Magsafe like connector doesn’t require an engraved port into the body and can be placed anywhere on the edge.

If you connect headphones via wire there has to be a port. Unlike charging and data syncing headphones are connected while running, the device is inside pocket or during other activities. It is necessary that phone and headphone are connected firmly so the connection doesn’t tip off during strong movements. So for a truly wireless device removing wired headphones has to face the challenge of replacing it with an equally good sounding headphone having great battery life that doesn’t require any effort to connect. This was the biggest challenge for a wireless iPhone of the future which Apple has already solved with AirPods.

So we might see a completely wireless iPhone in near future that truly is innovative and first of its kind. Judging by Jony Ive’s AirPods video and his announcement that Apple is working on wireless future for quite some time, the future might be as soon as 10 th gen iPhone 7s/8/X.

About me - My name is Jnanadarshan (Pronounced Gyana-Darshan) Nayak and I’m working at TATA Consultancy Services as a Strategy Consultant. I have Majored in MBA-Marketing from Xavier Institute of Management, Bhubaneswar in 2017.

### Amazon, The common enemy. Everyone from Apple, Google, Microsoft, Walmart, Netflix and some of the biggest names in their industry are scared of Amazon.com Inc. From retail to cloud computing and video

First we heard of Bots on Messenger [Facebook] platform, but then Microsoft showed the first AI powered bots for Skype in Build Conference 2016 and ever since the Bots word is doing rounds.