Everyone from Apple, Google, Microsoft, Walmart, Netflix and some of the biggest names in their industry are scared of Amazon.com Inc. From retail to cloud computing and video streaming Amazon is killing it everywhere. A CEO who doesn’t care about profitability and criticism with seemingly unlimited funds should scare everyone. Flipkart, the Indian company that brought the flavour of e-retail and till to date the largest Indian online retailer is facing fierce competition from Amazon.in. Flipkart might not agree but the truth is it’s losing the market to Amazon.

In the US Amazon has far more dominance than India. They’ve managed to scare off a lot of industry leaders. Netflix is one of them. Though according to a recent story Netflix has more viewing hours than Amazon Video, YouTube and Hulu combined, it can’t ignore Amazon. Netflix is still dominating the US because it was very early in the market and has more content and exclusive shows like House of Cards, Orange is the new black and Narcos. But, it’s changing fast. Amazon has also created shows like The Grand Tour which went on to become the most pirated show in history. Though the US is still the biggest market at some point in time the growth will slow down and both the players will look to emerging markets for growth. In markets like India, early movers will have an advantage and Amazon is winning the early days.

Flipkart was the early mover in Indian e-retail and is still the leader. Flipkart popularised internet retail and managed to build trust by giving deep discounts, options to pay during delivery and generous return policies. Amazon launched in India on June 2013 and since gradually capturing market from Flipkart and once an equal rival SnapDeal. Amazon has much to do with the killing of SnapDeal.

Netflix starts $9.99/m in the US and much of the world. Cable TV is the US is costly and internet is somewhat affordable. Instead of paying $15/m only for HBO, Netflix makes more sense. In India situation is completely different. Netflix has three tiers ₹500/m, ₹650/m, and ₹800/m. 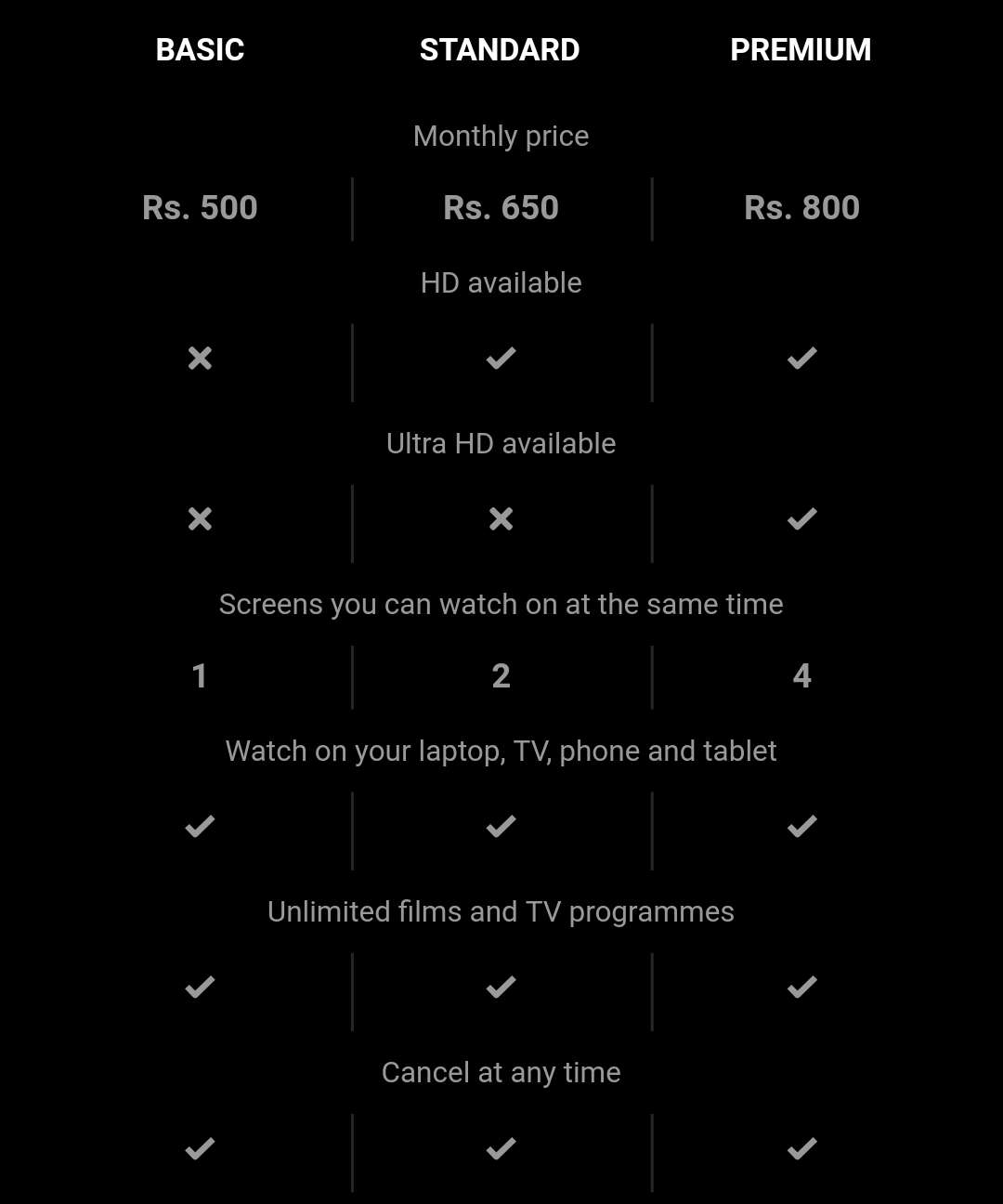 Compare that with any DTH or cable TV in India and ₹500/m will fetch almost the highest no of channels offered by any player. Though young people like I can survive on Netflix alone, I have another big issue, internet. Except for few metros in India smaller Tier 2 cities don’t have even decent wired internet and wireless internet is damn slow for HD content consumption. So complete cord cutting in India might not be possible like other countries. Now let’s compare internet streaming options available in India with Netflix’s pricing. Though there are a lot of players the fight is between Amazon Prime Video, Netflix and Hotstar (by Star India which is part of Disney) with all three having access to international catalog through their parent organizations. 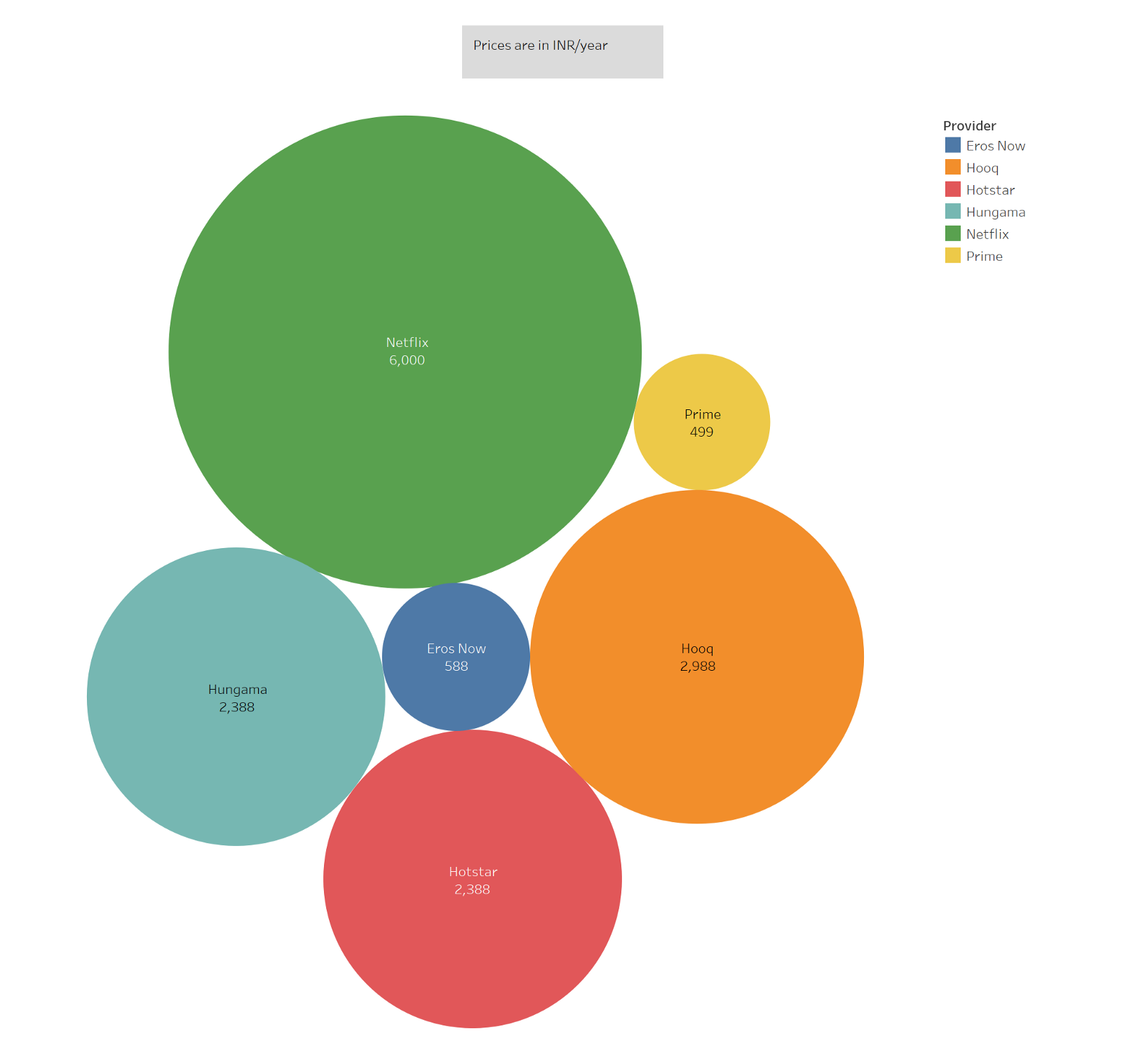 The above visualization shows the pricing issue of Netflix in India. Undoubtedly Netflix has a huge international catalog but other local players have access to exclusive Indian shows and movies that Netflix doesn’t have. Let’s discuss the two major competitors on Netflix in India.

Part of Star India which is owned by Rupert Murdoch’s News Corporation. Has access to Fox’s enormous catalog of English movies and shows. In India, Star is the biggest domestic player in terms of daily soaps and Hindi movies. Hotstar has also managed to acquire exclusive rights to shows like Game of Thrones in India. With Rs. 199/- month i.e. Rs. 2388/year along with a free tier Hotstar is rising as the leader in Indian streaming.

Internationally Amazon Prime is the biggest competitor of Netflix. In India Amazon has taken a lead with a huge international catalog of English movies, shows, Indian classic shows, Hindi movies and original Indian contents and with a throwaway price of Rs. 499/- year. 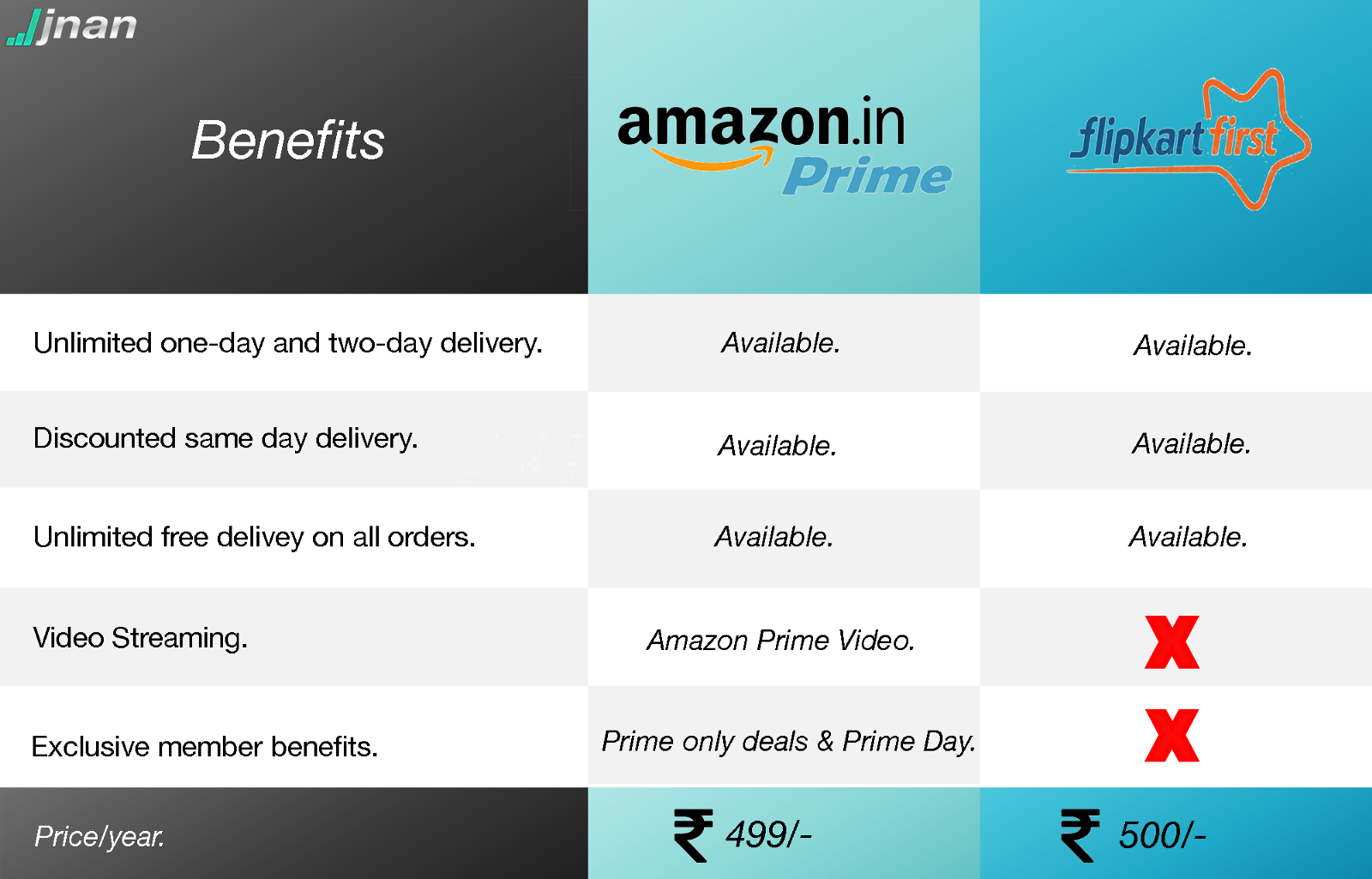 There is no doubt that Flipkart First (read FF) was heavily from Amazon Prime in the US. Flipkart borrowed two basic elements of Amazon Prime US. Free unlimited delivery with no minimum order amount and expedited shipping. Initially, Flipkart was pushing First but probably because of lack of customer intention later it abandoned efforts to acquire FF subscribers. But when Amazon launched Prime in India, it marketed with much rigor and also added benefits like Prime Video which is a huge deal. Prime also comes with early access to deals and even Prime only deals that provide the feeling of a privileged customer. While Flipkart can probably compete with other aspects on Amazon Prime, it’s simply not possible to fight huge catalog of Prime Video without external help. Prime or FF binds frequent online shoppers to one platform and in turn bring more revenue for the platform. After intense price war and losing billions of dollars the dust is settled and prices across platforms have stabilized. You can quickly search a product across platforms and see prices are almost same with the price varying as little as Rs. 10. Here the subscription comes into play and customer chooses a platform based on delivery speed and convenience. Due to services like Prime Video, Amazon is winning the war of acquiring most important customers in Indian e-retail market.

While VPN remains a big hindrance for Netflix to implement custom pricing in different countries, tying up with Flipkart which has a database of verified addresses will largely solve the issue. If Netflix offers a custom pricing for Indian customers, Flipkart can help verify the locality of users which will address the problem of cross-country signup and revenue leakage. Amazon is too big to fight for both Netflix and Flipkart individually, in India. They need to form an alliance to fight Amazon on each front. With Amazon Prime music right at the corner may be Flipkart can look forward to Saavn or Gaana to prevent Amazon from becoming the de facto e-commerce player in India. The alliances will be hard to form and revenue will decrease in short term but this will help Flipkart and Netflix keep Amazon contained. At least for now.

*Reading time - 2 min 31 sec* *Economic development is necessary but not at the cost of peace and social justice.* I’ve always supported the vision and the economic agenda of PM Modi

Jnanadarshan Nayak | Blog
—
Flipkart & Netflix. A match made in heaven
Share this